Adding your mod to the Custom Game Browser

After knowing the mod better, it's time to incorporate the mod into the Xash3D engine.

There is a file in the Xash folder called gameinfo.txt which is what the engine reads to register the game as a mod (or a game). Open the gameinfo.txt to see the following:

For more on editing gameinfo.txt, see the in the article Exploiting the Game Menu. Note that since the article was originally written for Half-Life SDK, it shows how to edit liblist.gam, but in the case of Xash3D, gameinfo.txt replaces the functions of liblist.gam. In fact, Xash3D automatically generates a gameinfo.txt each time a new mod that uses liblist.gam was played.

With that, here are some of the explanations for the various lines in gameinfo.txt:

These are advanced features used by Xash3D:

There are also things that we need to place as well. For instance, the function of type is just for the custom game menu only. To really set the game if it's a single player or multiplayer only mod, add this to your gameinfo.txt:

Making a link to the game

To make a shortcut, you either right click HL.EXE and select 'Create Shortcut' or right dragging (hold right mouse button and drag) to an empty space and click 'Create shortcuts here'.

Depending on the OS, you can now see either 'Shortcut to hl.exe' or 'hl.exe - Shortcut'. Right click it and select 'Properties' to bring up the shortcut's Properties panel: 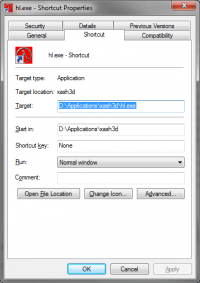 First go to the General tab and rename the shortcut to the name of your mod. Since I'm working on my mod, Nikki Shore, I renamed the shortcut 'Nikki Shore'. 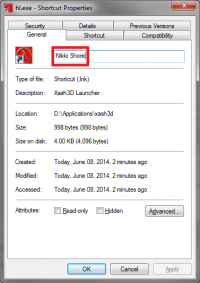 You can go back to the 'Shortcut' tab and begin editing the shortcut. From the 'Target' text box, add the following next to the lines '«directory»/hl.exe': 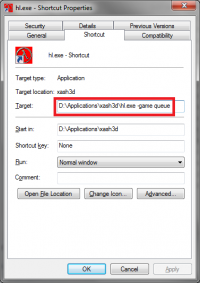 There are other parameters as well that you can add:

Batch files are another method of executing the exe with the parameters.

Go to Notepad and add the following to the blank untitled window:

Save it as a bat file (e.g. Run Nikki Shore.bat) making sure that you select 'All files' as the file type. The other parameters can be added the same way as the shortcut as well.

This will be your first foray into programming, by editing what is readily available and change it for your convenience. You can follow along with the tutorial or you can try experimenting on your own.

In this method, we will edit the game launcher exe source code which is located in game_launch. You can use this method as well if your game is sufficient enough to not need the Half-Life assets.

First, open the project by going to File>Open Project in Visual C++ 6 and select the filename 'game.dsp'.

After loading you see that there are three things you can edit from here. The first is editing the C++ source file 'game.cpp'. Go to this part:

Edit the GAME_PATH to point to your mod's folder. In our example, it would say something like this:

You can now disregard some of the code here or edit some of the strings to personalize it on your own. We can now save the .cpp file and proceed to the game.rc file … (

Use Visual C++ screenshots and examples.)

After editing the game icons and resources, you can now compile your application. (

Now you have your brand new application that you can run for your mod. You can now enjoy the sample map and explore more of the default mod.