What I learned in observing games nowadays is that most games are just rehashes of other games, some even sticking to the same formula over and over again. This is not an issue though, considering that AAA developers also do such. What's bothering me though is that people are now playing safe when it comes to making creative stuff. Mainly, because they don't want to be branded as a 'clone' or 'ripoff' by critiques and gamers alike.

Don't be discouraged though and instead be prepared for this, because most of the time, people expect something new to the table, something fresh for their eyes. This might stifle your creative freedom, but consider that most of the new games that are claiming to be original are just altering what their predecessor have done, making it better. Gamers might not know the difference, the critiques might say that this is a breath of fresh air, but you know that this is just something that you've picked up, say, from Half-Life among the examples. That's where the question comes in, what is the mod that you're doing about?

We can take the 'altering the predecessor' approach in making our mod as a good starting point, since we are just using an engine made for a specific game and modifying it.

We humans are good observers, as rational beings. We observe things in our everyday lives, when we take the train, when we hang out, when we just sit in front of the TV watching the news. If something caught your eye, you'll observe it even more. That's the same philosophy that we should do when we observe our games. For example, in Half-Life, we know that we are in the perspective of Gordon Freeman, a scientist caught in a catastrophe, we are in some science fiction action game with a nice pace and a smooth learning curve, we know that it's ahead of its time in almost anything even if the engine was based on the Quake engine. They have done something new to that engine and pulled it off.

In Max Payne, you are in the perspective of the titular character, you are in a grim and gritty noir-styled third person game set in New York City, you know that it featured a nice and slow dramatic scenes, but very high paced action. This is what you should look for whenever you play a game or just watching other people play with. This really ruins the way you look at games, but if you want to make a game, these are the things you should look for.

Step 2 - To write, or not to write: A question on story in video games.

This step is something that most modders don't consider but are important anyway to engage the gamers who play your game.

There is a nice quote in the Valve episode of All Your History, a video game retrospective show on Machinima that is available on YouTube: 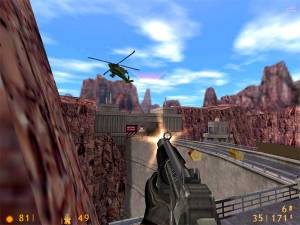 Instead of the traditional method of telling a story through cutscenes or not telling a story at all, Half-Life never left the perspective of it's hero, Gordon Freeman. As such, the story was presented in real-time, with the player feeling like they were actually involved in it as opposed to passively watching it.

This statement summarizes how Half-Life changed the way storytelling was made in games, as well as in first-person shooters. Story in games have been always popular, from Japanese RPGs like Final Fantasy, to Command and Conquer (where, like Half-Life, puts you in the shoes of a commander). Even Call of Duty does story telling as well, especially to the fact that the franchise stemmed from Medal of Honor, which started the WWII Shooter genre and produced by people in the movie industry.

But even so that Counter-Strike or Doom have no story in them whatsoever, they have immersion and the game rule serving as the story. You're a space marine in hell, you're a counter terrorist soldier on a mission in a dessert town, you have something to fight or defend for. Storytelling is still there.

All of them stem from a concept, this is what you should write first. Does it need a full blown story, or just need immersion and let the rules dictate the story? These things are considered when you make the story for your mod. Then there are two ways from there:

The plot needs to be simple, just try the three act structure that is common in stories as a start. For demonstration, we will use the plot of Half-Life as our guide.

Yes, making a story is a long process, but to be simple just write a simple story line down. You can flesh it out deeper once you get to making the game.

This is just a quick one for people who do not want to make a story. Doom had what was called a 'Bible' or a game document where everything is explained, from the features (which is up next, so stay tuned), the setting, the mood and the game rules themselves. There are many approaches for this, but these are the important things to consider adding:

Now that we have inspirations for our mod and we have the concept to begin with, we start off with the feature set. This is very intimidating to some, especially ones that are new to modding. We first check out the game's original feature set first and see where you want to make things better or change them completely. For example, you want to make a horror mod set in the rural setting with weapons that is grounded in modern times or you want to expand on the story in Half-Life, but adding something to the table or just want to make a better kick-ass Tau Cannon to troll people with. You list them down in paper or in a notepad file and put it aside on some corner (just don't forget where you placed it) and look at it in fresh eyes days later. This will ensure if you still want that feature or not and even add a new feature. This technique can also be applied to any literary work as well. Be careful though regarding adding features. There are times when you want to add something but you can't because you're still not experienced or the engine is not up to the task for your feature. This is what happened in Duke Nukem Forever. George Broussard wants to add more and more features to the game, breaking the game's development cycle because either the technology cannot do what he wanted or it does not link to the gameplay he wanted.

After all those writing, it's time for some drawing or 'passing-the-concept-to-others-so-that-they'll-be-the-one-to-draw' time! Apply what you want to make and do some concepts about it. Make a concept of the world, its technology and its inhabitants. From there, you can decide on how the mood is placed. This is a good time to watch references as well, movies, TV shows, comic books, video games, even real life, you name it, references are everywhere! There are many books regarding the art of games and movies. One example is Half-Life 2: Raising the Bar, which is the concept art and commentary regarding the making of Half-Life and it's sequel and the mods surrounding it. This can be a good example to see how you make concept art and decisions.

But not just anyone. First you show it to your team-mates, then to your relatives or close friends. Only then that you can show it to others such as forums or communities. This 'hierarchy' of sharing will allow you to not be discouraged and critiqued because you know these people well and they can give you advice 2) (no matter how stupid, you'll never know, it might work). But be warned! Do not show something if you're still not sure about it. There is a window for backing out in this phase, if you need to either edit or do something else. This will save not only time and money, but also your ego.

Remember that the planning stage is very important. This is the make or break of your mod. If you don't think about these considerations, these will haunt you in droves. Always keep yourself enthusiastic and don't stray over things. Stick to your guns, take risks and give back, these are the secrets of successful people, which is also the secret of mods like Team Fortress and Counter-Strike that gives players something to play for generations to come. This is just one method, it is still up to you if you want to follow it. There is no right or wrong way in making things, so experiment and don't hesitate to ask others. :)

1) Choices are nice things to add to the game, to give the players a sense of responsibility, but you can just add them either in the beginning or in the end, just don't overuse them as an excuse.
2) Be careful about people who are just showing face and being plastic, they might not be sensible and can discourage you further. Trust me, I've been there when I made my concept for Nikki Shore. This is where your patience is tested. It's recommended that you know the person you share things to. This advice also helps in real life too, you know.
xashcookbook/en/tutorials/beginner/mod/making.txt · Последние изменения: 2014/06/05 05:47 — crxtrdude